Posted on May 28, 2013inQ-AdmininLearn English Tips

Indeed, there are a number differences between American English and British English. 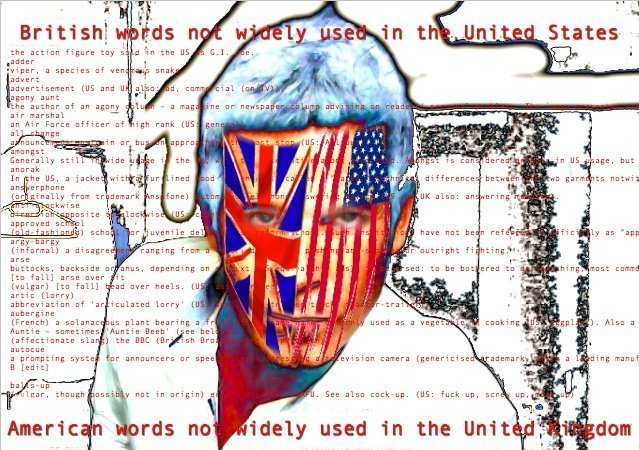 Most people are aware that a North American’s idea of buying a new pair of pants for a special occasion is very different to that of your average Brit.

Similarly, American tourists visiting the UK soon learn not to talk too loudly about their fanny packs, while a British visitor to the US has to be mindful of statements such as, “I’m just nipping round the back for a quick fag.”

There are numerous books and online resources available that will teach you many of the differences between British and American English and you will no doubt have studied them at some point in your English lessons if you’ve ever studied English.

However, I came across one such resource today that I think those of you studying English will find very useful, especially if your knowledge of the differences between American and British English could do with a boost.

The first one is a comprehensive list of British words that are not widely used in the UK.

The second one is a similar list of American words that are not widely used in the UK.

The words are mostly labeled as ‘informal, ‘slang’ and ‘vulgar’ and you should take care when learning these words and expressions to also learn when, where and how you could use them.

Here are just a few examples from the list of British words not widely used in the US:

argy-bargy
(informal) a disagreement ranging from a verbal dispute to pushing-and-shoving or outright fighting.

Example: There was a lot of argy-bargy in your classroom this morning. I think you need to teach them a bit more discipline, Mr. Rogers.

Example:  Why don’t we all go to that new coffee shop this morning and have a good chinwag.

the dog’s bollocks
(vulgar) something excellent or top quality, the “bee’s knees” (the business), the “cat’s whiskers”. Sometimes just “the bollocks.” (US: the shit).

Example: I love your new car, it’s the dog’s bollocks. (Note: be very careful where you say this – bollocks means testicles!)

It’s also worth pointing out that some of them are not labeled at all but that does not mean they could not cause offence if used incorrectly.

So, if you are not sure of the exact meaning, always check with your English teacher or a trustworthy native English speaker before using them.

One example is the word munter, which is defined as:

an ugly woman (rarely, man); it is similar to the word minger.

You will notice that the word is ‘munter’ not labeled as informal, slang or vulgar. However, you could potentially cause great offence if you use this word in the wrong company or in the wrong way.

For example, compare these two sentences which have a very similar meaning:

Again, if you are not sure of a word, be sure to check with someone who is.