Posted on May 15, 2013inQ-AdmininEnglish News Lesson

Here is another Q Language English News Lesson for you to hopefully pick up a few new words and phrases. Today’s lesson is about the Canadian astronaut who recently returned to earth after a five month space mission, but not before recording a fantastic version of David Bowie’s classic hit, ‘Space Oddity’. (See video and vocabulary check below.)

Canadian astronaut Chris Hadfield returned to earth on May 13, 2013, following a five month mission on board the International Space Station.

Before his return, Hadfield recorded a stunning music video – the first one ever filmed in space – featuring himself performing a cover of David Bowie’s hit song ‘Space Oddity’.

The video, which immediately went viral, shows the 53 year old astronaut floating around the cabin in mid-air, strumming a guitar and singing the Bowie classic with surprisingly dulcet tones. As he drifts around the zero gravity environment, incredible views of earth can be seen through the space station’s windows.

The original version of the song was used by the BBC as part of its coverage of the Apollo 11 moon landings in 1969.

Comander Hadfield became the first Canadian to command the ISS in March, 2013, and during his one of a kind mission he entertained, educated and directly communicated with a massive audience who avidly followed his daily reports via social media platforms such as Twitter, You Tube, Tumblr and Reddit.

Indeed, in recognition of his effective mastery of social media, Forbes described him as “perhaps the most savvy astronaut ever to leave Earth”. 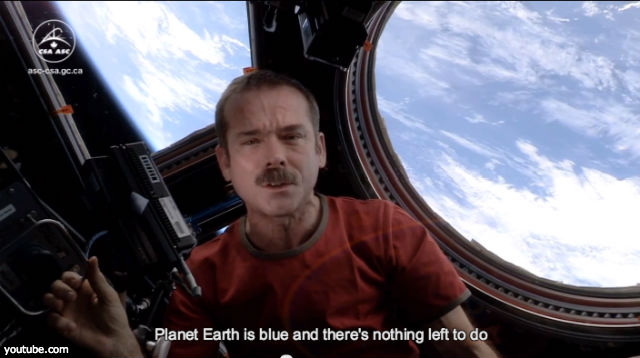 David Bowie was clearly impressed with the celebrity spaceman’s version of his song. His official Facebook page posted a message calling it the most poignant version of the song and on Twitter, Bowie tweeted, “Hallo Spaceboy”, a  pertinent reference to another of Bowie’s smash hits.

a cover
A recording or performance of a previously recorded original song.

hit song
Widely-played or big-selling recording of a song –
one that usual appeared in an official music chart.

strumming
Sweeping the thumb or fingers or plectrum up or down across
the strings or a stringed instrument.

classic
Judged over time to be of very high quality and outstanding of its kind.

dulcet tones
A sound or (usually singing) voice that is sweet,
melodious and pleasing to the ear. ‘Dulcet tones’ is often used ironically.

coverage
The treatment of an issue my the media.

one of a kind
Unlike anything else; unique.

avid (avidly)
Having or showing a keen interest in or enthusiasm for something.

pertinent
relevant or applicable to a particular matter.

smash hit
An unusually successful hit (i.e. a song, a film, a TV series)
with widespread popularity and huge sales.

If you’d like to learn English with us in Hong Kong why not check out our great selection of full or part-time courses. Click the English Courses tab at the top of this page