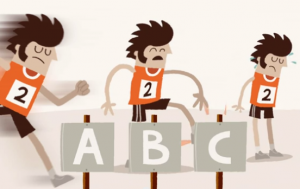 Last week we published the second  in a series of English video lessons  produced by the Cambridge ESOL team, and in this post we are pleased to present to you the third video in that series.

In this video, you will learn how the Cambridge English Listening Test works by trying out a small example of the test for yourself.

As the presenter mentions, this example is from the Cambridge English Preliminary Exam, which is also known as PET.

There is a transcript of the clip below but, in the first instance, try to watch and listen without reading the transcript and see how well you might perform in the test.

Hello, my name’s Jessica. In this clip you’ll have the chance to listen to part of a Cambridge English listening test and answer some questions. I’ll help you along the way. So, let’s get started.

The clip you’re about to hear is a radio interview with a runner. Here’s the first question:

At the February competition, Darren:

Now, listen to the beginning of the recording.

Interviewer:  Our next guest is the runner, Darren Hubbard. Darren, the year started badly for you.

Darren:  It did. In the February competition I was running in my normal events, the 200, 400 and 800 metre races. I’d done quite badly in the first race, though I wasn’t last. But the problems really began with the 800 meters. During the race I was injured and it took me quite a while to recover.

The correct answer is B, Darren hurt himself. In the recording, Darren says he was injured. Let’s move on to question 2.

Darren’s situation began to improve when he:

A) started a job with fewer hours.
B) was offered a place on the British team.
C) signed a contract with a sportswear company.

Interviewer:  When did things start to get better?

Darren:  In the summer, really. I was disappointed because I hadn’t got into the British team, but then I was offered a contract with a Japanese company that makes running shoes. The money meant I could stop work. I’d only been working part-time in a shop, but as you know, this can make things quite difficult for athletes. I accepted the contract immediately.

Did you notice that the words you hear, are not exactly the same as the ones you hear in the options? You have to understand the meaning of the recording and find the option with the same meaning.