Have you ever found yourself in a social situation saying or doing something that you realise, in hindsight, you should not have done or said? Perhaps, for example, you’ve congratulated someone for becoming pregnant, only to find out that they are not actually pregnant but have, in fact, recently put on a few extra kilos. If so, that is a faux pas!

If you’re still not sure, watch the amusing You Tube video below to get a good understanding of what a faux pas is.

In this , video British actress, Catherine Tate, plays a tactless woman who embarrasses herself and those around her when she mistakes a deaf man’s sign language with a game of charades.

Faux pas is actually a French expression which literally means false step. In English, however, we use it to indicate a social blunder or mistake, as illustrated in the examples above.

French speakers, by and large, use the word gaffe to describe a similar awkward social situation. They do, at times, use it figuratively, but to the French, a faux pas describes a physical loss of balance.

Faux pas are generally committed out of ignorance, thoughtlessness or lack of tact rather than out of spite. If you are witness to somebody else’s faux pas it is preferable to take them aside and correct them privately. However, if this is not possible, at least try to correct them calmly and politely so as not to cause further embarrassment to those who have witnessed the awkward situation.

You will often find the the expression faux pas preceded by a classifying adjective or adjective phrase such as fashion, cultural, email or foreign language.

An example of a fashion faux pas is a man wearing socks with sandals (a lovely look, every time, don’t you agree?). 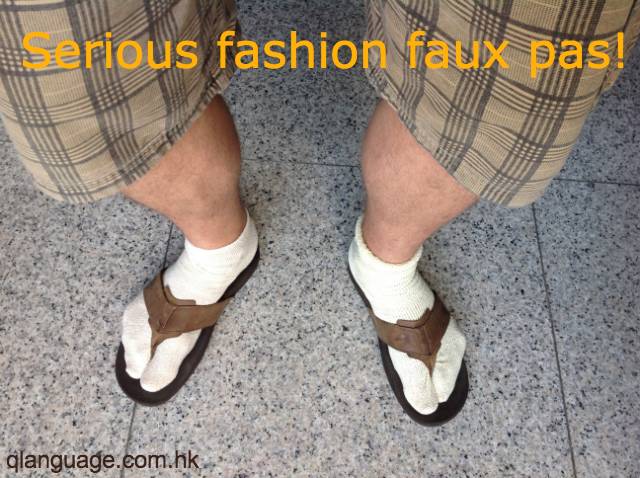 An email faux pas could be sending an intimate and very private email to your partner but cc-ing everybody on your contacts list. Very embarrassing indeed!

A cultural faux pas might be giving someone in the Middle East the ‘thumbs up‘ ( a gesture generally considered positive in western culture), particularly in countries like Iran, where it is considered one of the most offensive gesticulator insults you could offer. It’s very similar in western culture to giving someone the middle finger or ‘the bird‘.  Here is a good list of cultural faux pas to avoid. 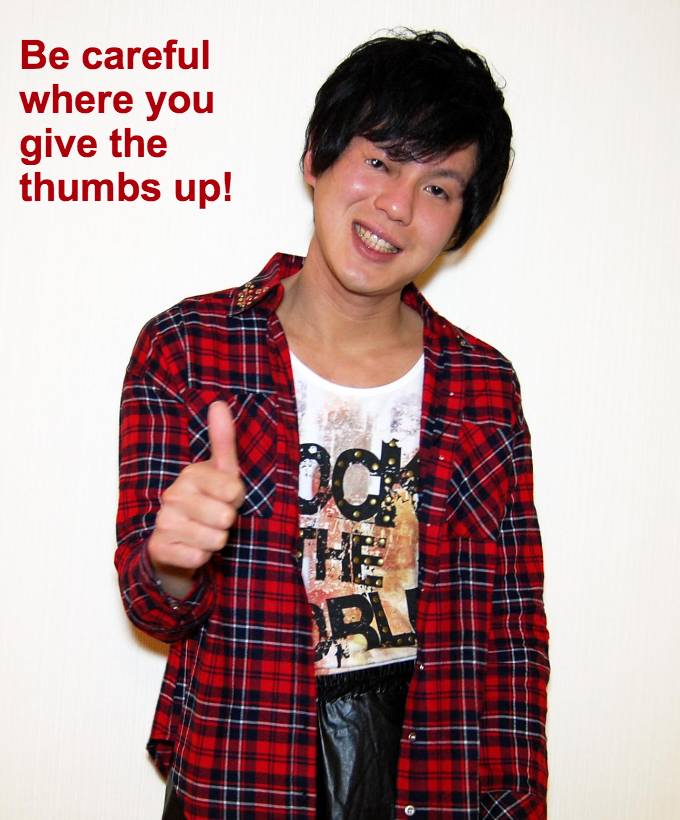 A foreign language faux pas is when you accidentally use a word in your target language that sounds the same as your own language but differs in meaning completely.

An example of this is the English word constipation (a condition in which there is difficulty in emptying the bowels) and the word constipação, the Portuguese word for the common cold.

Picture an English speaker in a Portuguese pharmacy ending up with cold remedies for his constipation, or worse still, imagine the potential consequences of a Portuguese speaker with low level English asking an English speaking chemist for medicine to cure his constipação. “Yes, I think I understand your meaning, Sir – here you are, this should loosen things up for you.”

The other type of foreign language faux pas is to use the wrong word completely in your target language because it sounds very similar to the word you believe to be the correct one.

An example of this, which I found here, is the story of a man working on a building site in Spain. Obviously with limited Spanish language skills, the man suggested to his Spanish co-workers that they needed some branches to help prop something up. However, instead of saying, “Necesitamos algunas ramas para ayudarnos.” (We need some branches to help us.), he replaced the word ‘rama’ with the similar sounding ‘rameras’, which in Spanish is a slang word for prostitute.

Another example of this type of foreign language faux pas is the story of the Parker Pen company in Mexico that wanted its advertisements to read, “It won’t leak in your pocket and embarrass you.”

Unfortunately, as the story goes, a somewhat careless translator at the company thought that the correct word for ‘embarrass’ was ‘embarazar‘, which is a Spanish adjective meaning pregnant.

As a result, the ad read something along the lines of: “It won’t leak in your pocket and make you pregnant.”

Take a look at the info graphic below for more funny foreign language faux.

So, the conclusion is, when you are learning a foreign language, you are bound to make a foreign language faux pas at some point. Just be aware of the fact and try to avoid them as best you can by studying hard and aiming to perfect your target language.