Give Someone or Something The Thumbs Up - Learn English Idioms
You are here: Home » Idiom Of The Day » Idiom of the Day – To give someone the thumbs up

Idiom of the Day – To give someone the thumbs up

Posted on September 10, 2013inQ-AdmininIdiom Of The Day 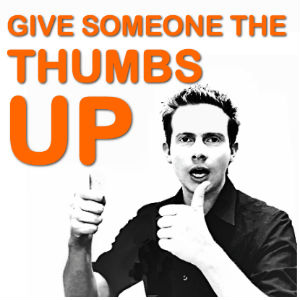 The thumbs up is a hand gesture achieved by clenching your fist and pointing your thumb upwards.

If you give the thumbs up you are showing your support or approval of someone or something.

Watch the video below to see Richard Ford (Q Language English teacher) demonstrate giving someone the thumbs up and explaining how you might use this common English expression.

View this clip on You Tube

1. Jane asked her her new boyfriend if he liked her new hairstyle. He just smiled and gave her a thumbs up.

2. Q Language Chinese courses get the thumbs up from students worldwide.

3. Arthur C Clarke’s award-winning film get the thumbs up from the Cannes Film Festival

WARNING! –  Be Careful Where You Give a Thumbs Up

Please be careful who you give a thumbs up to or where you give it – you could be committing a serious foreign language faux pas! In some countries and in some cultures giving someone the thumbs up is considered the worst possible insult and it could get you into a lot of trouble.

Thumbs up traditionally translates as the foulest of gesticulative insults in some Middle Eastern countries, especially in Iran — the most straightforward interpretation is “Up yours, pal!”. In Iran, it is traditionally an obscene gesture, equivalent to the use of the middle finger in the Western world. The sign has a similarly pejorative meaning in parts of West Africa, South America, Iran, and Sardinia, according to Roger E. Axtell’s book Gestures: The Do’s and Taboos of Body Language Around the World.”