Idiom of the Day – Kill two birds with one stone

Posted on October 2, 2013inQ-AdmininIdiom Of The Day 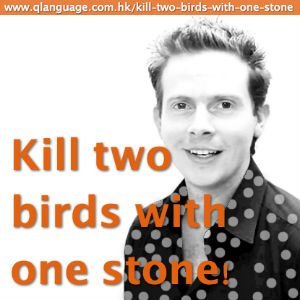 Here is another fabulous idiom of the day video from Richard Ford.

This time, Richard explains the meaning of the common expression to kill two birds with one stone.

There are those who feel that this particular idiom isn’t very pleasant seeing as it is associated with the hunting and death of birds.

Others even regard it as offensive and an embarrassment to the English language (read more).

Some people even prefer to create their own animal-friendly version of the expression and some languages actually have expressions that mean the same but don’t actually involve killing birds.

Watch the video below to see Richard’s explanation, then scroll down for more examples and some ‘alternatives’ from around the web.

View on You Tube at:  http://www.youtube.com/watch?v=Ca4JB6sOPL0

For example, my girlfriend tells me, “You have to get a gift for Mother’s Day and you also have to get some gasoline for the car.”

So, I decide to go to the gas station, buy some gasoline and buy a present for my mother; perhaps some flowers. Therefore, I have killed two birds with one stone.

So, can you think of a time when you have killed two birds with one stone?

Please let us know and leave a comment, we’d love to hear from you. Thank you.

As Richard states in the video above, to kill two birds with one stone simply means to complete two actions in one.

Essentially, you are solving two objectives (perhaps a problems, a task or a challenge) at the same time or with one single action.

1. Whenever I’m doing the housework, I like to listen to English language learning podcasts. That way, I kill two birds with one stone; my house gets clean and tidy and at the same time my English language skills improve.

2. I killed two birds with one stone when I was on an Intensive Mandarin course in Hong Kong last week. After studying Chinese all day, I made sure to catch up and relax with at least one old friend in the evening.

There are conflicting opinions as to the origin of this particular idiom – as is the case with so many common English expressions – but here are a few possibilities as to where the idea of killing two birds with one stone first originated. Choose for yourself which one seems the most plausible.

Alternative Source:
In the Greek Mythology tale of Daedalus and Icarus. Daedalus is held captive by King Minos on Crete in a high tower. All he is able to see are high walls around him and large birds overhead awaiting his and his son, Icarus’ demise. Daedalus devises a plan to throw stones at the birds in the hope of fashioning artificial wings to enable the pair to fly home. He finds, with his stone through a clever throwing motion, that he is able to strike one bird with the ricochet hitting a second bird, thus killing two birds with one stone. The rest is history.

This idiom dates from the 1600s, and it was initially used in a somewhat pejorative way, to describe a philosopher’s attempt to prove two arguments with a single solution. The implication was that killing two birds at one time is extremely challenging and unlikely, and that the philosopher’s attempt should be viewed with extreme suspicion. The philosopher had obviously failed to satisfy his critics, who suggested that his attempt was about as successful as a try to knock out two birds with a single stone.

Over time, “to kill two birds with one stone” has come to be used more generally to accomplishing two goals at once, and the negative connotations have largely vanished. In fact, people are encouraged to think of ways to accomplish it, thereby living much more efficient lives. This is especially true in the business world, where employers are constantly on the hunt for ways to cut costs and improve efficiency, so something that kills two birds with one stone could be quite useful.

The website Ticklebugs.com once held a competition to come up with an alternative way of saying the same thing but without mentioning the harming of birds.

Many people responded with a variety of suggestions of their own creation. Here are just a few:

Can you think of any better ones yourself?

If so, let us know in the comment box below.

Here are some ‘real’ alternatives from other languages:

It seems that the Italians also don’t mind offending birds or bird lovers. Apparently they say:

And the Portuguese aren’t too animal-friendly with their expressions either! They say:

Depending on your point of view, the Germans are a little kinder to the animal kingdom with there choice of expression:

Do have a similar expression in your language or do you know of any    expressions like these in other languages?

Let us know in the comments section below 🙂