Learning Mandarin Chinese Is Easy – If You Are Prepared To Work At It! (Chris Parker Story – Part 1) 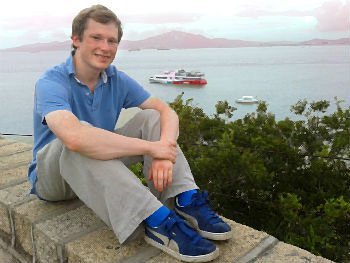 Learning a new language for some people is easy, whilst for others it is a very daunting prospect. Some have a natural talent for language learning or were fortunate enough to be raised speaking two or more languages. Other people had a bad language learning experience in their school days and are convinced that they will never be able to master a new language.

Whichever bracket you fall into, and particularly if you were brought up speaking a language in the Indo-European language family, learning Chinese can be one of the most challenging languages of all to learn.

Some struggle to master the Chinese tones whilst others find it very difficult to get to grips with the numerous Chinese characters. (There are approximately 80, 000 of them but, fortunately, you will really only need about 3,500 in Standard Chinese.)

That said, if you are someone who is thinking of learning Chinese I’d like to present two inspiring videos to you. You’ll find the first one on this page and the other one by clicking here.

The first video (below) was uploaded to You Tube on 17 October, 2011 and the second one was uploaded on 5 May, 2013. Both videos feature a truly inspiring young chap called Chris Parker.

Chris, who is 25 years old, speaks fluent Mandarin, and in the videos he demonstrates his impressive mastery of the Chinese language by sharing (in Putonghua) the various challenges he faced from days he first considered learning Chinese during his last year of high school (approximately 6 years ago) right up until he reached the stage of creating his own Chinese learning course and setting up his own website.

Watch the first video here and – if your Mandarin is not quite up to Chris’ level – read the English translation below.

In my last year at school I made my mind up to study Chinese. At that time, my form tutor, when he found out I’d chosen this subject, pulled me to one side after class and said, “Chris, are you sure you want to study Chinese at university? Do you know how difficult this language is? If you really want to study Chinese, I support you but, you have to be sure about it!”

I didn’t know how to reply at the time but I knew a lot of people thought I was quite strange! One time I went to visit a Chinese department there was a guy who’d come to meet people and I asked him a lot of questions about his study.

He was in the fourth year of university and he said when reading Chinese newspapers there were a lot of characters he didn’t know, he could only pick up the gist.

Hearing that really made me think I really had a big challenge ahead of me. Later, after I got to university, our Chinese textbook had over 20 lessons and we had to study 1 unit every 2 days. There was lots of new vocabulary dialogues and a lot of Chinese characters because at the time I had never written a Chinese character before – I had a lot of difficulty initially writing characters.

So after about a week I started to think, how difficult is this Chinese going to be? Can I really take on this challenge? After 2 or 3 weeks I got used to writing characters. Although I found a lot were difficult to remember I would spend a lot of time after class practising writing characters, using computer software to check the correct stroke order.

In the holidays I would watch TV and practise characters at the same time and listen to textbook dialogues slowly a load of times. Afterwards, I got used to my study I really got into it and started to really enjoy it.

However, after 2 months I had learnt all the characters in the menus there and made a lot of progress with everyday speech. When I got to Mainland China a lot of people were really curious towards foreigners and everybody would ask me a load of questions like: What country are you from? Do you like China? Do you like Chinese girls? What places have you been to? Questions like that.

Beforehand, I had read on the Internet that Chinese people are passionate about studying English so it would be hard to practise Chinese with locals. But my experience wasn’t like this in fact it was the opposite; most people were very willing to to speak to foreigners and speak Chinese.

After the first week of university I didn’t have any more doubts about my decision to study Chinese, and I never regretted it. And a lot of friends I met in China couldn’t speak English at all so if I couldn’t speak Chinese I wouldn’t be able to communicate with them.

I also got a lot of enjoyment from studying Chinese history, philosophy and literature. I think that studying Chinese and other languages has changed my view on life, way of seeing other people and has broadened my horizons.

So I hope that I will be able to gain even more enlightenment from my study and work in the future!

So there you have it, impressive, eh? It just goes to show that with a little determination and a lot of hard work learning Mandarin Chinese is easy!

Please leave a comment below and let us know if you are inspired by Chris Parker’s story.

Or tell us if you think learning Chinese is easy or difficult?