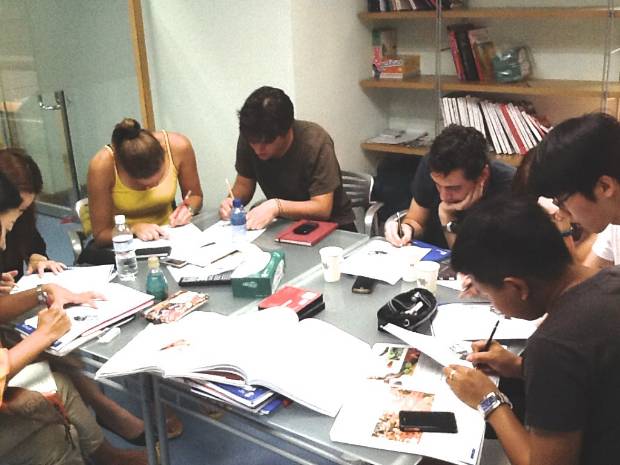 The multi-national mix creates a great learning environment for both students and teachers alike. As Byron, one of our best English teachers says,

My favourite thing about teaching at Q Language is the background of all the students. They come from almost every continent, so they have a lot of different perspectives and stories to bring to the classroom so we have really interesting classroom discussions.”

And one of our ex-teachers, Anneka,  once said,

One of our newer and already very popular English teachers, Marika, recently interviewed two of her students to find out what motivated them to come to Hong Kong and why they had decided to study English. They were also asked why in particular they chose to study at Q Language. As you will read, both students had a similar reason for coming to Hong Kong but different motivation for studying English. Here’s what Marika learned about the students’ respective stories and how their English language levels have developed whilst at Q Language:

Firstly, a few words to introduce the students:  Cenk Gunay, who comes from Turkey, has been in Hong Kong for almost a full year, out of which he has studied English for seven months. He plans to continue on his English course for about two months more. He was placed in an intermediate level English class even though he admitted,

The level was too high for me at that time, but I wanted to have a challenge.”

The second student who kindly agreed to share their experience with us was Hiroko Ku, who comes from Tokyo, Japan. She has been in Hong Kong for about two years, out of which she has spent ten months studying English. She started at beginner level but worked hard and finished her studies at end of October this year at intermediate level. Hiroko reminisced,

I chose to start with the lowest level, because I couldn’t speak at all.”

Both Cenk and Hiroko, like many other expatriates, followed their partners to Hong Kong and it conveniently gave them a good opportunity to start studying English.

It is my first experience in Asia and I have enjoyed it so much!”

Cenk said with a big smile on his face. He continued,

Hong Kong is such a modern city with many opportunities for shopping and for tasting interesting cuisines from all over Asia”.

“I’ve been lucky to find many good opportunities in Hong Kong as well as meeting people from many different countries”.

They both agreed that the people here are friendly and that the atmosphere in Hong Kong is quite pleasant. In fact, Hiroko laughed as she said,

I’m enjoying my time here so much that I would prefer to stay in Hong Kong.”

Even though they had similar reasons for coming to Hong Kong, their motivation for studying English was quite different. Cenk chose to learn English to further his career as he had worked for an international company in Turkey and he knew that being able to communicate well in English would have boosted his career prospects.

Hiroko, on the other hand, wanted to make friends with people from other countries and be able to travel independently or with her friends.

Cenk and Hiroko both agreed that the main reason for choosing Q Language over other language schools was the relatively flexible class schedules available. Cenk explained that he was able to build a schedule which easily matched his personal needs.

Note: Q Language students can choose an Intensive schedule with morning and afternoon lessons up to 24 hours per week with group and private lessons or a more relaxed schedule with only a few classes per week. See all English courses and schedules by following the links here.

When I started with the Intensive English Program, I had five different teachers who came from either England, Australia or North America. This gave me a great opportunity to learn different accents and some colloquial vocabulary.”

I especially appreciated the fact that I could choose my lessons according to my learning targets and this allowed me to concentrate on my weaknesses, which were speaking and reading. I also managed to adjust my work schedule to fit in with my English studies.”

Cenk’s also pointed out that Q Language was easy to find on the Internet and that the website had all the necessary information he needed.

Hiroko, on the other hand, got a recommendation from her friend whose English had improved a lot after taking an English course at Q Language.

For many language students, the most important goal is to improve their speaking skills, and Hiroko and Cenk agreed that this was especially important for them.

They both also said that their English course at Q language has been very effective as they can feel that their understanding and speaking has improved dramatically. Neither student had the confidence to speak in English before they started. Cenk recalled,

At the beginning, I just smiled.”

They both agreed that they had learned more than just the language. They said,

We have learned so much more than just the language, too. We learned about other cultures and countries,”

I didn’t have opportunities to speak with people from other countries in Japan, so I’m very happy to be in Hong Kong and studying English.”

As an additional benefit, Cenk felt that he has learnt how to study English and how to use the Internet to support his studies. He also noted,

I have really found a passion for languages whilst studying here at Q language.”

He was quite content, too, that he didn’t have to sit any exams!

The only negative point that the students came up with was that this experience has to come to an end. As a result, when that day comes, both of them plan to continue studying by reading books and newspapers as well as listening to English radio or watching English films and  TV programs.

It has been a pleasure to follow Hiroko and Cenk on their journey. From the start, both of them worked hard and both were highly motivated. Consequently, they have gained a lot more confidence and a real passion for learning English.

For everyday situations, this means that Cenk and Hiroko are able to express themselves better and they no longer shy away from any situation when it comes to English.

We would like to send a big thank you to Cenk Gunay and Hiroko Ku for sharing their experience of studying English with us and thank them, too, for choosing Q Language. As with all our students, we wish them continued success with their language studies and respective chosen life paths.